This is a massive release that has been in the works for the past six months. We’ve managed to churn out minor releases even during the development of this new major version. This continuous workflow was enabled by feature toggles — people were able to try out the new features even while using the stable version by opting in and give feedback.

But I can’t wait for everyone to get their hands on this new version because it’s so much better. And it’s designed so that everyone is able to upgrade to it immediately without breaking a sweat.

PHPStan 0.12 is brought to you by Gábor Hojtsy (@gaborhojtsy):

PHPStan has already been tremendous help in our preparation for Drupal 9 across the whole Drupal ecosystem, as a backbone of drupal-check, Upgrade Status and drupalci deprecation testing. It allows us to find common patterns in deprecated API use, make critical tooling decisions and rally the community. Thank you!

The flagship feature of this release. It deserves its own article — check it out to learn about what they can do for the type safety and documentation of your code.

How this feature came into fruition in PHPStan? In mid-May this year, Arnaud Le Blanc sent me an email out of the blue that he’d like to help me out with implementing generics. This is exactly the kind of letter you print, frame and hang on the wall. Because what followed was the best collaboration I’ve had with anybody in a long time. We’ve bounced back and forth with over ~50 pull requests and hundreds of commits, gave each other feedback, tested and polished the code. And while there are still some ideas we have that could be implemented in the future, we’re quite happy with this and let others make use of it in 0.12.0.

Part of the feature (rules checking for correct usage of generic types) was implemented during the EU-FOSSA hackaton in Brussels at the beginning of October. But more on that a bit later.

After some time of having levels 0 to 7, there’s a new level in PHPStan. But it’s not 8.

Levels in PHPStan serve as a vehicle for progressive introduction of the tool into the codebase and the workflow of the team. Instead of getting all the errors reported that PHPStan is capable to find, it only reports the most severe ones on level 0, lets developers fix them, and only then progress to higher levels which are more strict and fixing them actually requires to improve the overall quality of the code.

Brief overview of levels on 0.11.x and before is as follows:

I believe that all projects are able to achieve level 5 given some reasonable amount of time. But levels 6 and 7 are much easier to achieve on greenfield projects where these checks are enforced since the beginning. They influence how you design your objects a lot.

Adding that as a new level as level 8 would be an easy way out but wouldn’t reflect the difficulty to achieve it. It’s easier to go through your code and add missing typehints than rewrite the whole thing to satisfy levels 6 and 7.

So who has previously been on levels 5+ should now be able to jump at least one level higher if they add typehints to all their code.

PHPStan has been offering phpstan/phpstan-shim Composer package that distributes PHPStan as a single PHAR file without risk of conflicting dependencies. Over its lifetime I’ve been removing differencies in usage between the mainstream phpstan/phpstan package and this one. It reached a point when it could be used by everyone without any downside. So why it shouldn’t be the default and only distribution method when it’s less hassle and allows more people (those that depend on the same packages as PHPStan itself) to upgrade to the latest version?

With PHPStan 0.12, phpstan-shim is no longer needed and will not be updated anymore. All users should move to phpstan/phpstan. PHPStan extensions continue to work as expected.

Development of PHPStan including pull requests is now happening over at phpstan/phpstan-src.

With this feature, PHPStan again knows more about the code and is able to point out always true or false conditions.

Integer range type was developed by Jan Tvrdík also at the EU-FOSSA hackaton in Brussels. 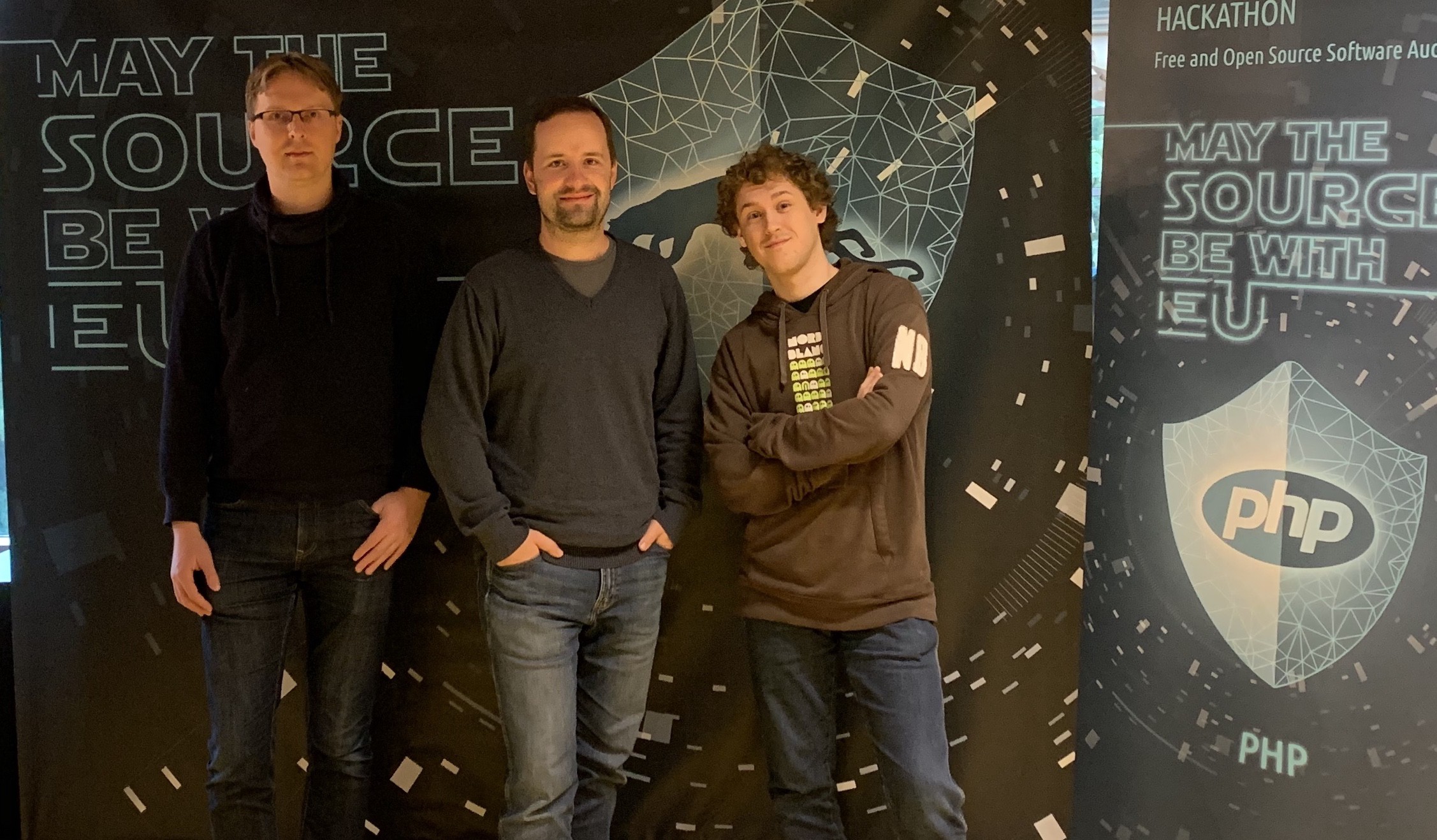 We were honored to be invited to the event. It was a great opportunity to achieve two full days-worth of open-source work what would otherwise take weeks of constant interruptions and back-and-forths. It definitely sped up the development of PHPStan 0.12 and helped bringing it to the final release this year.

Lukáš Unger implemented checking for inconsistencies in entity mappings at the hackaton. These errors can lead to sneaky bugs. This is also especially relevant now with native property types available in PHP 7.4.

You can even describe your own types for this purpose. See the README for more details.

It’s dangerous to accept all possible strings in a function but pretend that they’re an existing class name. That’s why PHPStan introduces the “class-string” pseudotype applicable to all PHPDocs. Only literal string or ::class constants can be passed as an argument into it, or you can require class-string through the whole call chain. You can also narrow a string into class-string with the help of class_exists() and related functions. Passing a general string into class-string is only reported on level 7+.

Function calls with no effect #

It doesn’t make much sense to call functions and methods without any side effects on separate lines. It only makes sense to call them if you’re interested in their return value. They are the polar opposite of functions that have void return type. PHPStan detects if you forget to use the returned value for example by saving it into the variable or passing it to another function call.

Examples of such functions are count or sprintf and plenty of methods on DateTimeImmutable.

Baseline to the rescue! #

This is not a complete list of new features and checks. It would be overwhelming to include everything in this article that’s supposed to be easily digestible. That’s what release notes are for.

I encourage everyone to upgrade to get the latest checks. If you’re worried how many new errors you will have to fix, I have good news for you. Thanks to the baseline feature released recently, you can get to a green build immediately and fix those errors later when you have time. But the new and changed code you write will be held to a higher standard set by the new version.

Do you like PHPStan and use it every day? Consider supporting further development of PHPStan on GitHub Sponsors. I’d really appreciate it!